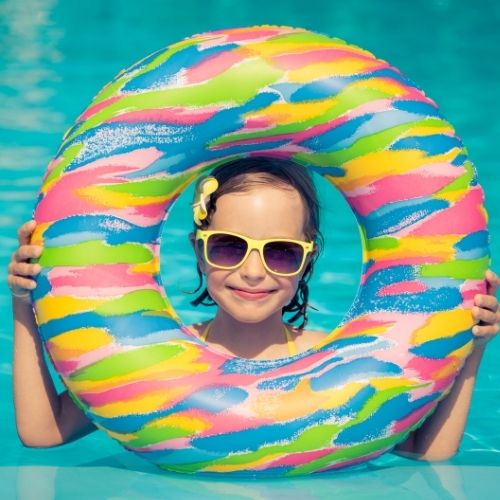 Three years ago we bought a home with a swimming pool for the first time. The homes we lived in before this did not have a pool and the kids always wished for one. They loved the idea of playing pool games especially during the hot summers we have here in southern California.

Our kids were ecstatic when we first moved in! They literally ran around the house screaming with joy as we recorded them on video. That first year they played in the pool for hours on end and had a blast!

We sometimes had to make them get out because they were still swimming until it was dark.

We sometimes even bribe them by giving them more screen time if they swim for at least an hour! Sad parenting moment, I know. At times to our shame we resort to guilt tripping them by telling them we work so hard to keep this pool nice just for them and they never even use it.

After realizing none of this worked and actually made things worse we vowed to do something different.

The kids main complaint was it was boring. So we did some research on some pool games and went to work to see which ones actually kept our kids happy as they used the pool.

Here I will share with you the pool games my kids enjoyed the most in hopes that you too can have a pool that actually gets used this summer.

The object of the game is to push all of the ducks to the other side of the pool.

Give each person an equal amount of ducks and the first person to get their ducks to the other side of the pool wins.

You can play with as many people as you want but we found it worked best with 2-3 people.

This game is played with a clear plastic bottle filled with water. Be sure to remove the paper label before using.

One person will throw the bottle into the pool while the other players have their backs turned.

Wait until the bottle has sunk to the bottom of the pool and then players jump in and try to be the first to find it.

You can play this with two players as well and use a timer to see who is fastest at finding the bottle.

Because the bottle is near impossible to see it makes it very challenging to find!

You will need a fishing net and some type of pool toys to use as fish.

The object of the game is to catch as many fish as possible using the net.

Each person gets their own net and can not touch the pool toys with their hands.

Whoever catches the most fish wins!

This game can be played in rounds to lengthen the game time and create more of a competition.

This one will take some creativity as each person will make their own small boat.

The boats should be made out of cardboard or something similar as it should be able to float.

Players can add decorations or even place toy people or animals in the boat.

Then kids can race their boats in the pool by pushing the water. Players can not touch the boat with their hands.

The first boat to cross the finish line wins.

Try another round, but this time let kids make changes to their boat for better results!

This game is a hoot to play! Each person will need one t-shirt that has been soaked in water and then frozen overnight.

The object of the game is to see which person can thaw and put on their t-shirt the fastest.

They can use the hose, jump in and out of the pool or roll around on the grass to try and thaw it out quickly.

Get your videorecorder ready because you’ll want to see this again for laughs!

With this game you will need a bunch of ping pong balls, a marker and two containers of some sort.

On the ping pong balls write numbers from 1-20.

Next, toss them all into the pool.

You can play with two players or teams. Either way when you say “Go” all players will jump into pool.

Players will be able to grab only one ping pong ball at a time and bring it to their teams designated container at the edge of the pool.

Once all the ping pong balls are gathered add up the numbers on the balls to see who wins.

This game is a lot like the game colors. If you do not know how to play let colors let me explain.

One person stands out of the pool on the edge of the deep end while the others hang on to the side of the pool just below him or her.

Each person in the pool must think of a color. Once they all have a color in their head they will say they are ready.

Next, the person who is it will slowly start calling colors out and listening carefully.

If a player in the pool hears their color called they must try to quickly and quietly swim to the other side of the pool before the person who is it hears them.

The player outside the pool must jump in and try to tag them.

If the person can make it without being tagged they win. If they do not make it they are now it.

The pizza version is exactly like this but instead of calling colors you would call pizza toppings.

This pool game is exactly the same as the whack a mole game except in water and with a pool noodle.

One player will have the pool noodle and try and hit the other players on top of the head as they go under the water and pop up.

Luckily a pool noodle is pretty soft and its unlikely anyone will get hurt. Just in case a clear rule on how to whack the mole gently is needed.

Once the person has whacked all the moles he or she picks the next person to be it.

Grab some water balloons and get ready for a wet and wild fight!

Divide players into two teams and have each team stand on opposite sides of the pool.

When you say “go”, players will start throwing balloons at each other until all the balloons are gone.

The teams will try to get as many water balloons as they can without popping them. This means they will need to dodge the balloons or catch them.

The team with the most balloons at the end, wins!

This is a simple race that can be done with any number of players. All you need is a starting point and a finish line.

Players will start in the water, holding onto the edge of the pool.

If you’re looking for some fun and exciting family pool games, be sure to give these a try! From water balloon fights to doggy paddle races, there’s something for everyone to enjoy. And the best part is, these games can be enjoyed by all ages!

So gather up the family and head on over to the pool for some fun in the sun.

Please let me know of any pool games your children like to play so I can have more options for my kiddos!

P.S Here are some other fun Summer activities to keep your kiddos busy this summer.